"DyE Fantasy" refers to an animated music video that was used by a musician in order to promote his single. The music video is known for being very disturbing, and it currently has over 50 million views on YouTube. For those who are weak in heart, please feel free to leave.

The music video begins with a group of 4 young teenagers sneaking into a local pool. Two of the young adults were shown kissing and one goes as far as to put his hand into his girlfriend's swimsuit. We are then introduced to a brown-haired girl, who, instead of kissing the boy she's with, chooses to jump into the water.

In the water something in her vagina starts to move so she goes to the surface, and when she resurfaces from the water, she immediately began to notice that her two friends were possessed by worm-like aliens. She escapes, but the boy who was talking to her is attacked by the woman while she is escaping. After a failed attempt of going through the window, she immediately goes back into the water.

This time, however, instead of resurfacing at the local pool, she finds herself in another world through a portal at the bottom, gazing upon a giant, Lovecraftian creature in the distance. The sight of this entity causes her eyes to violently explode/burn out of her skull.

What you see until the first dive of black-hair-girl is what is actually happening. what monster represent is the horror of sex that has been injected to the girls mind through her familly and religion. her vagina moving is her feelings of horniness that she is scared of. those monster are horny people trying to have sex. the brown-hair girl attacking the boy, is she going to give him an oral sex, and the big monster cock is, the boyfriend #1 trying to seduce her for sex. and when she caves in she feels like she has gone to hell and done the worst thing.

Meaning behind the giant penis

The most common explanation for this video is that the video was a metaphor for sex and forbidden knowledge, and how either can be perceived as damaging to a young mind. You could say that the young adults in the music video only came to the local pool so that they could have relations with each other. The first two characters freely accept that that was what society expected of them, while the brown-haired girl was extremely hesitant at first. The worm-like aliens represent the pitfalls of young sexuality, while the titanic alien creature in the other dimension, along with the dark-haired girl's reaction to it, can be seen as a metaphor for the loss of one's innocence. 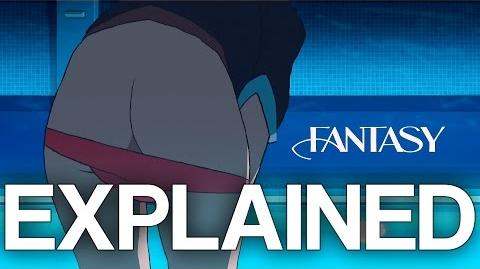