Foster's Home for Imaginary Friends is a very creative series. Can there be anything poignant about this series?

This 2014 theory posits that Frankie Foster is actually a younger version of Madame Foster. The theory points out that Frankie has a similar clothing design to her grandmother, and that they seem to almost appear exactly a like. It is believed that Madame Foster created Frankie as a means of maintaining order in the foster home after she was gone. She loved the foster home and all of the imaginary friends there, but she knew that because of her aggressive aging, she wouldn't be able to maintain the house for long. This theory also points out how Frankie is never shown as having an imaginary friend herself (other than possibly the Scribbles, as shown in a flashback), and that she never really seemed to have a life outside the home. It is believed that she dates humans either because she likes humans more than imaginary friends, or that she dates them because she was unaware of her position as an imaginary friend.

There is also an alternative take on this theory. For example, it answers the question that if Frankie were indeed an imaginary friend, then why would she need a driver's license? This alternative theory asks what if Frankie was real, but Madame Foster herself was her imaginary friend? It is believed that the real Madame Foster died a few years ago, and that Frankie couldn't cope with the loss of her grandmother. The theory also points out how childlike and energetic Madame Foster was compared to a typical grandmother, and that she typically acts as though she were one of the imaginary friends herself. It is believed that Frankie stays at the foster home, because she wanted to keep the charade up that the imaginary Madame Foster was the real deal, and also because she still obsessed over her real grandmother's death. 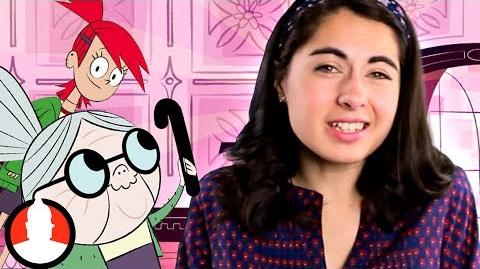 Frankie is the only real character

Warning: The following theory is way darker than the other two.

As opposed to Frankie not existing in reality, it could be that she is the only real character in the show, leaving Mac and Madam Foster imaginary.

Frankie grew up in a broken home, perhaps because her parents lived in constant bickering, not having enough time to spend with their daughter, so she made up an imaginary friend. She would spend all of her time with this friend, leaving her parents slightly worried, but concluded that it was appropriate for her age. But as she aged into a teenager, her imaginary friend remained her only and best friend. Her parents took her to a psychiatrist, perhaps after kids at school teased her for her infatuation with her friend and she responded angrily. The psychiatrist prescribed medicine to help with what were proven to be full-blown hallucinations. As her friend slowly began to disappear, she fell into a deep state of depression, concerning her parents further. But on the brink of divorce, they had no time or money for more psychiatrist visits. Frankie eventually finds out about the medication which was kept secret from her, and responded furiously. She ran away from home blindly, with her mother and father frantically following. She continued running and eventually lost them in a bad section of town, known for drug dealings. She comes to a huge abandoned mansion, sprinkled in many colors of chipped paint. But to her, after days of running and hiding without a dose of daily medicine, the boarded up cobweb infested mansion looked like a dream come true. She ran inside and continued to live happily as her best friend bloo returned. She made many more imaginary friends, as well as hallucinating a family to fill her empty need for one. Mac was a manifestation of her miscarried brother, whom her parents had already named before his too soon death. Madam Foster was representative of Frankie's grandmother, who was the only one of her family that loved her, despite the condition that brought about her hallucinations. Her days of joy at her grandmothers house translated into her new home, where she romps with ghosts of what was and what never could be.