I'm not the author of this theory. Here is the original author: http://pl.teoria.wikia.com/wiki/U%C5%BCytkownik:Gobo333

One of my favorite cartoon is Batman. Watching episodes in adulthood, I still think so. However, I noticed some interesting things and I write this theory. Each character is part of the story of Dick Greyson, a comic Robin. Dick, it's a rape victim, from the rich Bruce. Instead of writing the whole story, I will describe the characters seen in the cartoon and what they really are.

Batman / Bruce Wayne - When he was little he saw the murder of his alcoholic father by gangsters who was owed money. When he became a millionaire. He bought a teenage dick and molested him sexually. He is seen by him as a bat because he wears sodomy costumes.

Dick Greyson - Gotham City is the world seen through his eyes. He is a schizophrenic and drug addict. He sees good people as bad. Perhaps that is why his assailant helps. He's 14 years old and has been serving Bruce for four years as a "sex toy";

Gordon - Alfons - policeman. In exchange for bribes "forgets" about rape on Dick;

Joker - A nice detective trying to expose Wayne. Robin perceives him as evil because he can not live without Wayne;

Ridler - Joker's Friend and math genius. He used to work for B, but he slowed down because his employer was bullying him.

Penguin - a rich businessman who professionally catches pedophiles as part of revenge for making children hurt. Robin sees him as a penguin, for he remembers.

Two faces - a friend of Bruce who also liked to load Robin in cocoa. He liked it because he does not do it now, because he is trying to fight his pedophilia.

Bane - a dummy mannequin stolen by Bruce from the museum.

Here is one of the theories. Regards. 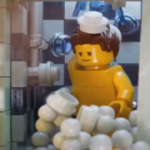